Our opinion at a glance

The Jackson Ultima 2021 frame, the brand’s first inline model. Jackson understands the importance of continuing to skate outside of the rinks as more and more champions supplement their ice time with inline roller skating. In addition, the rise of artistic inline worldwide promises more and more inline skaters.

Strengths and areas for improvement 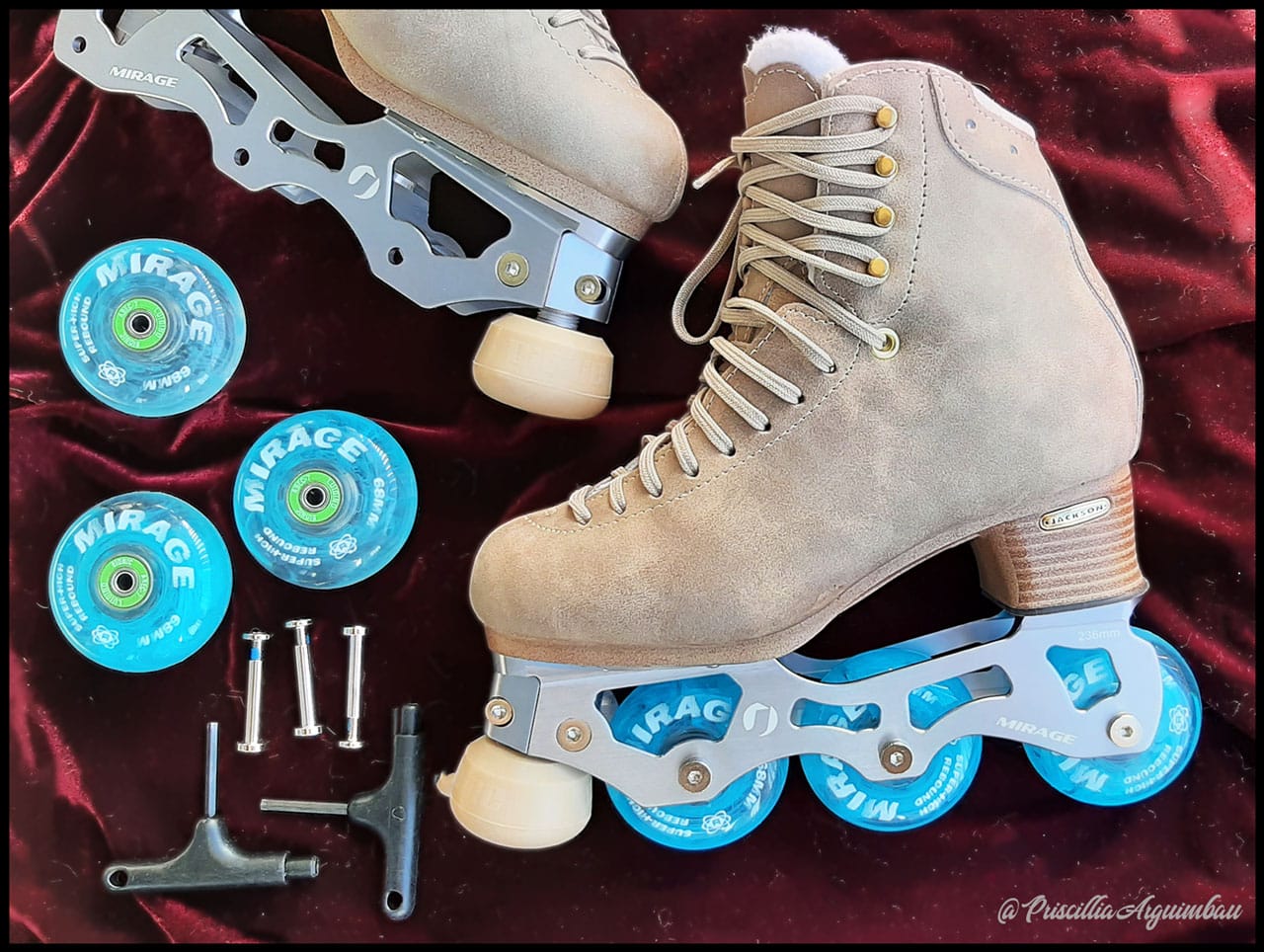 The Jackson Mirage Frame in detail

We tested the Mirage frame mounted on a Jackson Elite Pro 5320 boot (Coach and Show model). The wheels are also the brand’s Mirage model in 84A and 68mm. They are fitted with Bionic Luigino ABEC 7 bearings.

At first glance, the frame looks very similar to the Snow White model. Without wheels and toe stop, mounted on the boot, the whole is very light.

The Mirage frame has a very airy shape and reinforcement bridges between the wheels. These many openings bring lightness. It does not need a speed ring to insert into the wheels like other brands, the shape of the frame allows the wheels to be inserted very easily.

The reinforcing bridges provide good strength and prevent torsion of the frame. The design of the toe stop is on the other hand of the same kind as the Italian brand, with a metal base.

Description of the frame

The Jackson frame is an artistic 3-wheel inline model like most competitive inline models. It has a classic rockering system, with a natural curve in its construction. It is a simple and well-designed frame.

Once the three wheels are removed, we see several things:

The rockering system on the Mirage is similar to other frames of the same type and already existing. It is very small, but sufficient for the practice of figure skating figures.

On basic skating (front, rear, braking), no differences with the other frames. The rockering is light and very similar to Snow white.

The toe stop is quite impressive as in Roll Line, which is appreciable and allows powerful pushes. The rubber is soft, the grip slips at times, it will wear out quickly outdoors. Backward skating is comfortable despite its short size. Skaters used to quads will love it, as will those have used to the fairly short ice dance blades, or even beginners for its stability.

The adaptation is problem-free and we find the same characteristics as with other well-known brands. We like the size of the brake on jumps (flip, lutz, toe loop) which is very wide and allows great stability as well as great power.

Turns and steps are a little less easy than on the Linea, the Pic Skates or the Golden Horse due to its less pronounced rockering. But its small size allows the skater to maintain very good agility. A skater accustomed to very curved blades will need some adaptation time or may be able to compensate with a larger diameter wheel for increased rockering.

Like most manufacturers today, rockering does not matter in the execution of spins. The toe stop keeps the advantage of the other frames and allows good stability to keep the spin in position. Despite the very soft wheels on the outside, the spin remains stable and of good quality.

The frame should cost less than 200 euros. This is very interesting considering parents can’t afford very expensive skates for their child. This is a good quality and very affordable frame for inline figure skating!