A frame with Spanish colors

Our opinion at a glance

The STD is an inline frame that has the same type of cut as the Snow White. It is now understood that inline frame manufacturers have understood the importance of the rise of inline figure skating, somewhat, thanks to containment. Its colors make that frame very original …

Recommended use: regular to intensive practice of artistic skating. 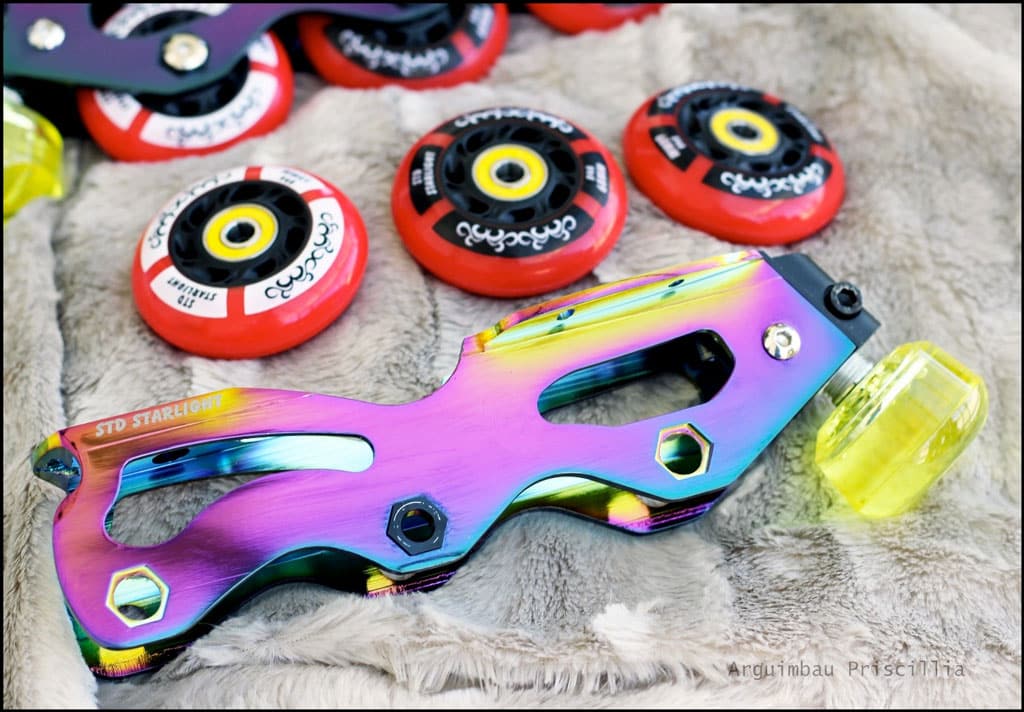 Zoom on the STD frame 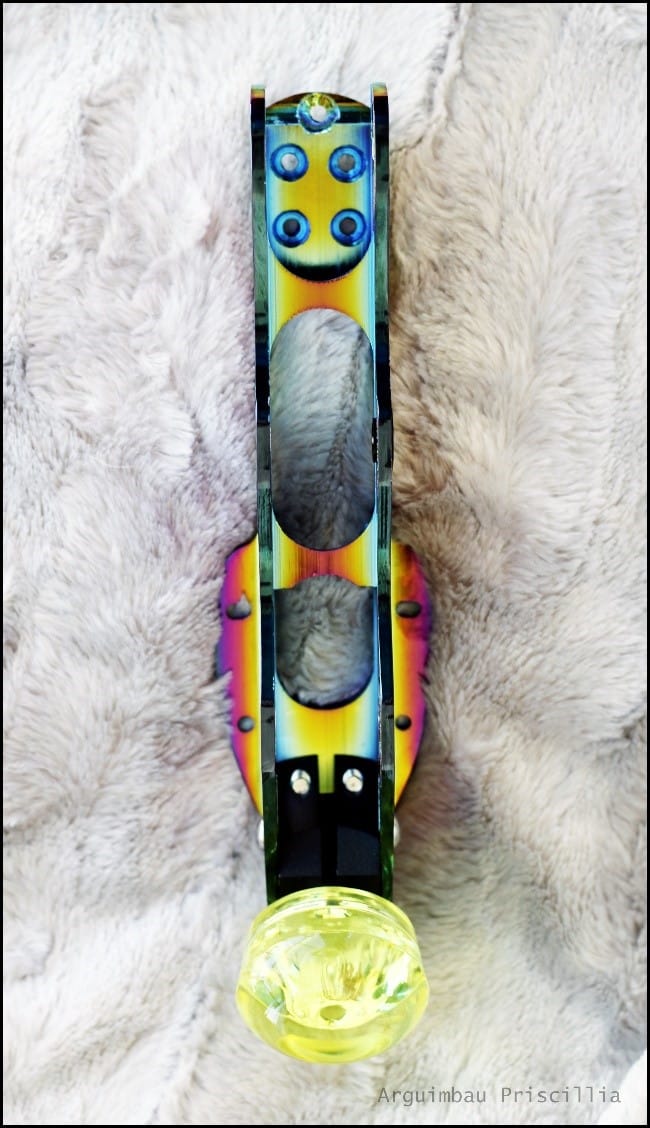 We tested the STD plate mounted on an Edea Chorus boot (size 235). The wheels are of the brand’s “STD”   model, and are mixed models.  Here, they are in 68 mm, 84A and 89A hardness. They are equipped with ABEC 5 bearings.

Description of the STD frame

The STD is a 3-wheeled inline model like the Snow White or the Linea. It has a classic rockering system, with a natural curve in its manufacture. Its strength, or its weakness, its color! It does not go unnoticed, making it a highly recognizable frame, but difficult to match with its competitive outfit, dress.

Rockering on the STD frame

The rockering system on the STD is similar to other frame of the same kind, like the Snow White. However, the hexagonal shape of the axis adjustment parts and the numbers inscribed suggest that an adjustable system for each wheel could have been thought, much like on the Roll Line. We assume that this was not done, in order, perhaps, to get the deck out faster than expected during containment. In any case, the idea of having 3 adjustable wheels might be interesting, and maybe STD will come into it. On our frame, the numbers are no longer inscribed…

Once all three wheels are removed, we see several things:

-The axes are the same as at Pic Skates or Snow White. It takes two Allen keys to remove the axis, then the wheels. The only difference with the other frames, the spacers are integrated on the outside of the plate rather than inside as for the Pic skates and there are 2, with each wheel and they are hexagonal in shape.

The assembly is quite simple, (simpler than with the Roll Line for example). There are a few fewer pieces. When mounting/disassembling, one can be annoyed by the spacers that move inside the bearings and therefore prevent the axis from placing properly in the wheels. Hexagonal spacers tend to fall during assembly as well, so patience is required.

–And last, the toe stop that fits directly on the frame, as at Snow White. It is a STD brake, universal quad type, very easy to adjust.

-The frame is very short. Shorter than the 3-wheeled Pic Skates and slightly shorter also than the Linea.

At first glance, the frame looks very similar to the Snow White. Without wheels and brake, mounted on the boot, the whole is quite light.

The STD seems very close to the Snow-White model. It has almost the same shape and reinforcement bridges between the wheels.

The reinforcement bridges allow a similar solidity to the Snow White and are non-existent at Pic Skates or Roll Line Linea. The toe stop design is also the same as the Snow White. 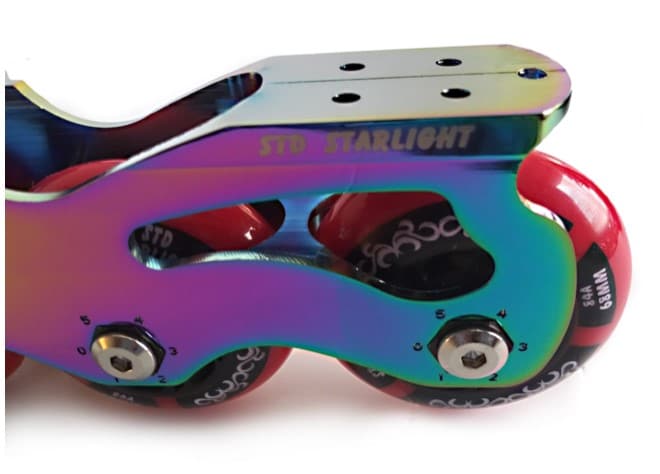 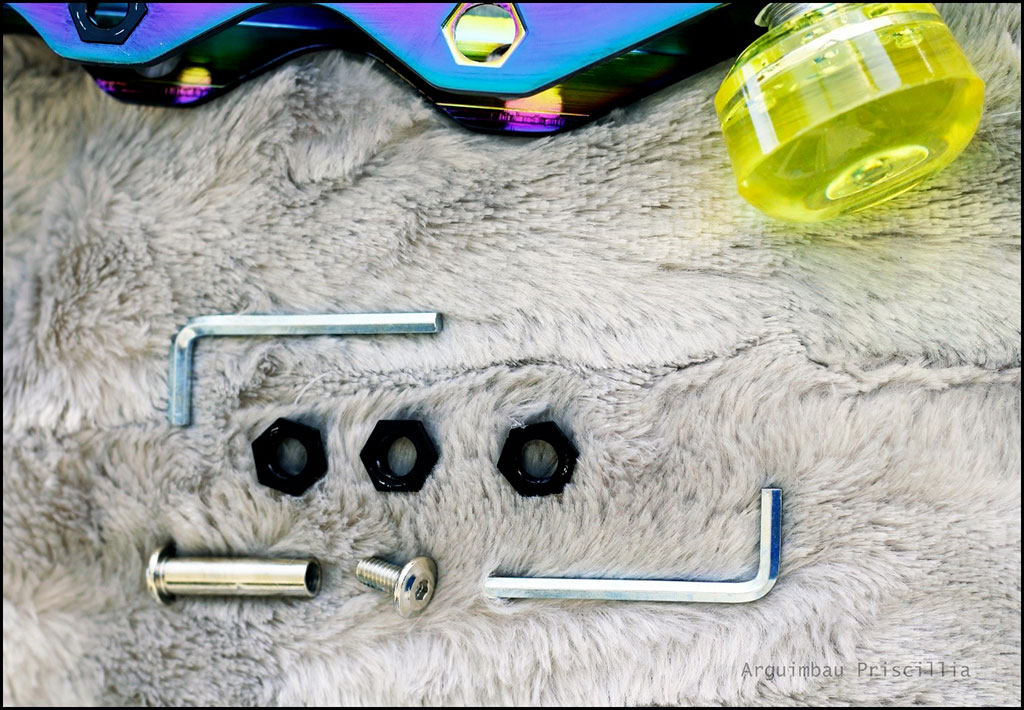 On basic skating (front, rear, braking), no differences compared with the other frames. The rockering is light and very similar to the Snow White.

The toe stop is quite imposing as the Roll Line, which is appreciable and allows a powerful skating. The rear skating is quite subtle because of its short size and is also similar to its Taiwanese competitor. Skaters accustomed to quads will love it just like the short blades of ice dancers.

For jumps, we note that jump landings are also more delicate because of the short length of the frame. But you can quickly get used to it and find the same characteristics as the Snow White. We appreciate the size of the toe stop on toe jumps (flip, lutz, toe loop) which is very wide and allows for great stability as well as great power. The brand understood that the toe stops were quite wide were finally very appreciated by figure skaters and offers several models of toe stop adaptable to the frame.

Again, the turns are a less easy than on the Linea or Pic Skates because of its less pronounced rockering. But its small size allows the skater to maintain a very good agility.

Like most current manufacturers, rockering doesn’t matter in the execution of spins. The toe stop keep the advantage of other frame and thus allows a good start and keep the spin in place. The front wheel in 89A allows you not to adhere too much on concrete and to turn long enough.

The price of the STD frame remains in the price of the Snow White. It can be found between 270 and 319 Euros in the shop on the internet, with wheels and toe stop… This is still expensive for an artistic inline frame, but it is one of the most affordable frames on the market today, in 2020. So, if you love its look and want something similar to the Taiwanese one, the STD is for you! 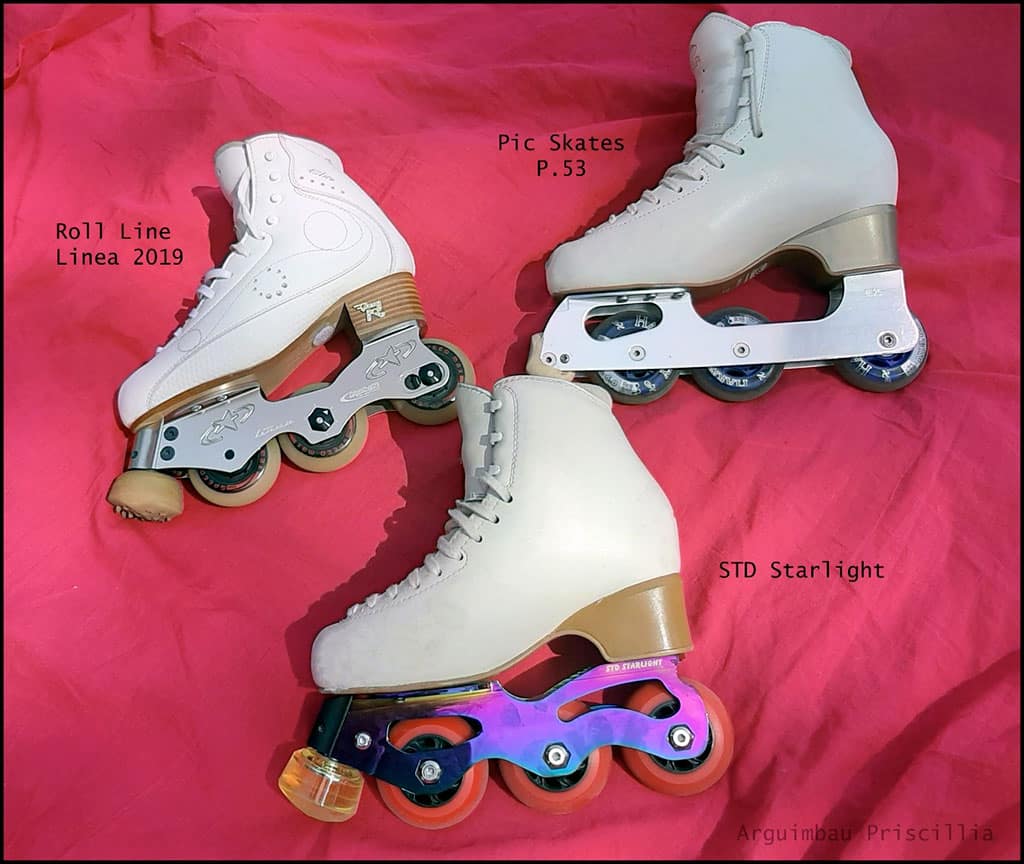