World Tour on the Track of Yeosu: the Pakistani delegation

Let’s carry on our tour of the unrecognized delegations present at the World Speed Skating Championships of Yeosu (South Korea). The Pakistani delegation is made of 10 athletes, 5 seniors and 5 juniors. They are all men, all students and they all speak fluent English… 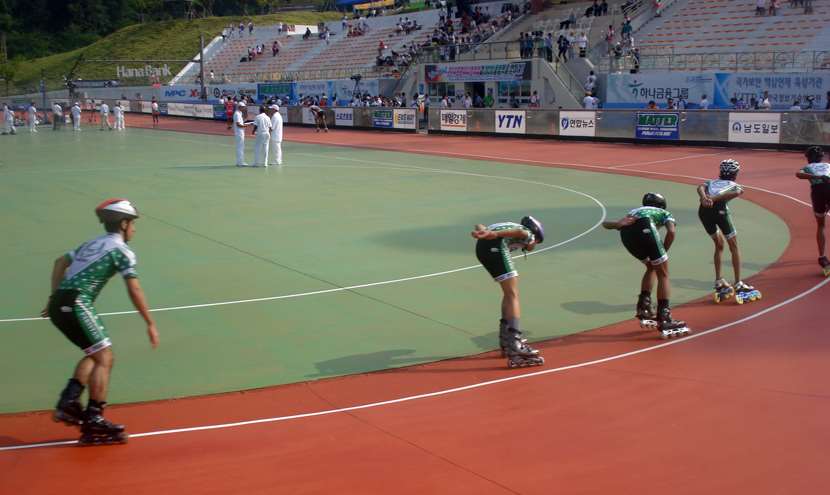 English is the the official national language used by the Pakistani administration, as the country used to be an English colony until 1947; Urdu is also a national language but is not used for official documents. None of the athletes here is professional or even semi-professional. “If there are no women, it is mainly for diplomatic and political reasons, but we hope to integrate them in the delegation as soon as next year!” Coach Mohammad says. He lives in Miami and benefits from the dual American and Pakistani nationality. “In fact, I regularly fly back and forth between Florida and Pakistan to take care of the club I founded in Pakistan and follow the development of our sport there.”

In Pakistan there are no tracks and no road routes. Skaters train on car parks or on “highways”, and just like in India (let’s rest assured!) there is a sweep vehicle at the back of the pack to ensure the safety of the skaters… No surprise, skating is a sport that is not common and completely unknown! The most popular sports of the country are cricket, field hockey and football.

The Pakistani federation has a dozen clubs and between 150 and 200 licensed skaters. The PSSC (Pakistan Speed Skating Club) is the first Pakistani skating club. It was created by Mohammad himself and gave birth to the other clubs of the country. The 10 Pakistani present in Yeosu are all members of the PSSC. “We have to admit that there are lots of other skaters in the country who could have met the selection criteria but they could not come for financial reasons.” Mohammad added. Indeed, the selection is made through pre-qualifiers which take into account the skaters’ experience (participation to other world championships), but also their times on given distances. The final selection is made according to the results during the national championships, which take place each year in December, and during the Asian championships.

Several projects of skating development in Pakistan are in progress: a system of coach sharing has been implemented with their Iranian and Indian neighbors. “Approaching European coaches is harder, there is a difference of culture and of civilization between Orient and Occident. There is above all a lot of apprehension and they probably have preconceived ideas.” Mohammad explains.

Financial and material means of the Delegation 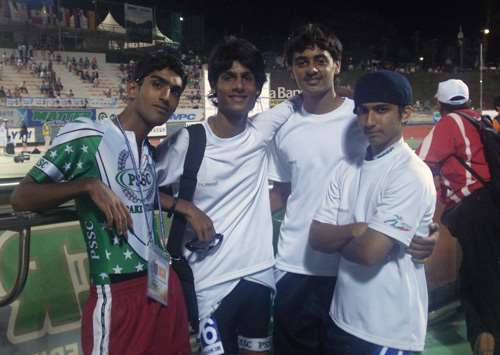 Here is one of the big questions! A question asked by so many people on the side of the track when noticing the skates of three of the ten Pakistani… “Why do these young Pakistani take part in a World Championship with fitness skates, which not only are of poor quality but also quite well-worn?”

In fact Mohammad explains “In theory I am the one who supplies the skates. This year we had communication problems as for the transmission of information between Pakistan and the USA which prevented me from equipping all the skaters.” Never mind from now on as one of them has just received new skates. “But I do not want him to use them in Korea because I do not want him to end up in the hospital” the coach adds. As for the two other ones, they should get theirs when they are back in Pakistan. And that is for the best!

The skaters could afford the trip thanks, mainly, to the financial support of the PSSC. The number of athletes of the delegation of the 6th most populous country in the world (170.6 millions on inhabitants) kept on growing these last years, and Mohammad is as much proud as some representatives of other countries came to congratulate him and note the development of the Pakistani team.

The objectives of the Pakistani

In terms of goals, the skaters have to do their best and at least get experience out of each race. “I think that they are doing quite a good job” Mohammad says. The juniors have their eyes wide open and feel flattered to hear their coach talk of them this way. It has to be admitted that from the side of the track, some people even wonder why they take the start. Indeed, the Pakistani skaters find themselves left behind the pack, most often as soon as the start, in the first meters of the race, and only manage to make a couple of laps before being disqualified by the judges. And when a Senior does the two first laps of the 15km with elimination in the pack (even if it is in the back of the pack), it is an actual great feat. “He did it, he did it!” the Juniors exclaim on the side of the track. That is a real satisfaction. Improvements are made little by little…

Waiting on the side of the track, Ali, Faisal, Arsalan, Shafique, Tariq and the others admire and cheer on the skaters of the delegations they like best. “We think that Chinese Taipei is a very strong team, we also like the Iranians because we can see they are fighting, they are making a lot of progress.” One of them says. Then Mohammad adds that “they also admire South Korea, I must say that they are so wonderful with us, they have been helping us for two years already.” Before taking leave, they all repeat their comments on France “We love them!”

For the record, the Pakistani spent their time saluting us on the side of the track after this interview. Some of them even shyly asked to take a picture and pose with the French. These young Pakistani are remarkably kind, and we cannot but wish them to manage to follow their dreams on great skates, for that later their results draw attention and arouse congratulations, not compassion.

To conclude, here is an exclusive note by Mohammad:

“The Pakistan team has been looking at the French team for their great come back, and our athletes were impressed by Yann Guyader as he had a bad fall during its elimination race and made it back to the end. I hope to learn from French with their great leadership as it has always been through history.

Thank you for all!”

Pakistan at the World Championships in Italy

World Tour on the Yeosu track: the Indian delegation

Episode 3 : The Delegation of Sweden at the European Championships

Episode 4: The Czech delegation at the European Championships

Episode 6: the Slovenian delegation is not in shape…

Episode 7: The delegation of the Magyar country

Episode 8: no Copernican revolution in Poland…