Let’s go on with our world tour of the delegations attending the 2011 speed skating world championships in Yeosu (South Korea). Argentinia came with skaters of different categories. Let’s see the place of skating in the Land of Football…

Stage #9: Welcome to Argentina, the delegation that has striken all the minds with an unlikely title! 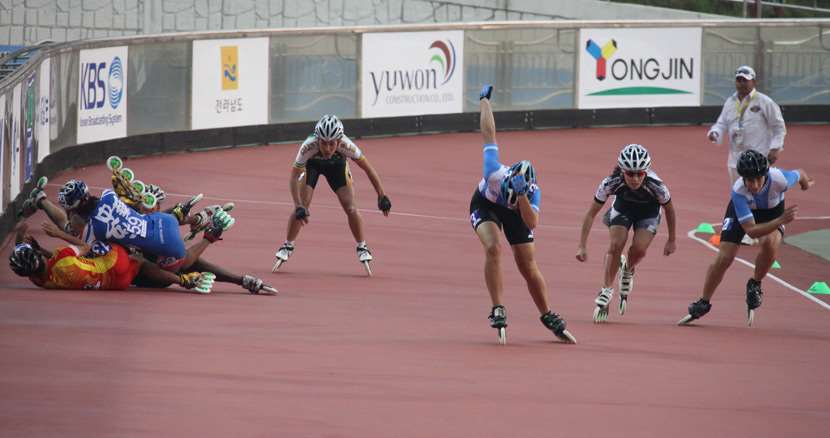 Of course we will present you the composition of this South American delegation. Of course you’ll soon know more about the development of skating in the country. Of course, we’ll talk about the selection criteria, the preparation as well as the objectives of the world championships. But I can’t help but starting this article with the event which will have striken these world championships: the Women’s Senior track 1000m race with a double of the white and blues. « Argentina » comes from latin « Argentum » which means « silver ». But this didn’t prevent the delegation from tasting gold… Waas it luck..?

Thanks to Argentina, skating has its Steven Bradbury!

Remember the Salt Lake City Olmpic Games in 2002 and the incredible victory of Steven Bradbury during the short-track 100m race… Who could have forgotten the fabulous destiny of this Autralian who got through to the final thanks to the disqualification of a Canadian in quarter-final and to the fall of an opponent in semi-final? In final, his tactic was obvious: aware of his weak level compared to the other finalists, his coach had told him to remain at the 4th place, waiting for a fall – « anything could happen »! And the impossible did happen during the last bend with the collective fall of the three pretenders to the podium. Steven bradbury was the first to cross the finish line and this is how he won the Olympic gold!

In roller-skating, from now on, we’ll refer to Argentinian Women: Nearly the same scenario unfolded (let’s exaggerate a bit) on the bumpy track of Yeosu in South Korea this year. 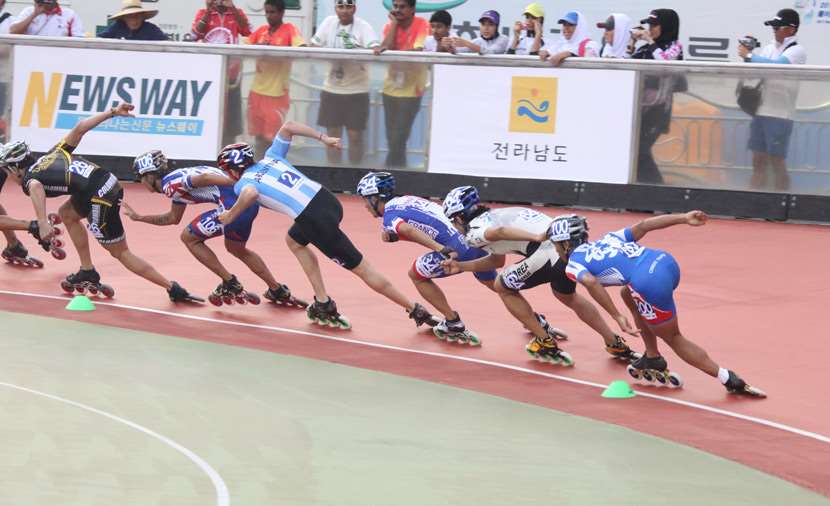 In series, nothing to declare. The thirty registered skaters are divided into five series. The qualified are the winners of each series and the eleven best times. The series happen to be quite heterogeneous: four seconds separate the fastest series (1”31’494) from the slowest (1”35’347). The totality of the third series, run in 1’31’794, qualifies for the semi-final. Estefania Fasinato, ranked 3rd of this series in 1’32”234, is thus propelled to the next round. Same thing for her compatriot Melisa Bonnet, ranked 2nd in the fifth series in 1”32’806.

In final, the improbable happens! Around 6 PM, the eight finalists start their five track laps. Columbians Kelly Martinez and Jercy Puello taking the lead, with Taiwanese Yang Hochen, gifted Chinese Dan Guo, and local Yi Seul Aun on their heels. The favorites are in the final and the pressure can even be felt in the public. The two Argentinians and Australian Angeline Thomas bring up the rear. Most of the public is ready to bet on a Columbian double, which is quite a common result for these 2011 world championships. But at the exit of the last bend, an avanlanche of skaters…! Whereas the victory was almost certain for the Columbians, Kelly Martinez slips when she starts to push again for the ultimate hectometers that would lead her to victory… Unfortunately, she can’t stops herself from falling and sweeps her compatriot Jercy Puello away with her. Neither Yan Hochen nor Dan Guo manage to escape the Columbians and they come and pile up on the Columbian « cushion » to whom the victory was promised. The way is cleared for the last straight line, the four unluncky skaters being out of order next to the security barriers. The other half of the finalists is still standing: indeed there are four candidates left for three places on the podium (Estefania, Melisa, Angeline and Yi Seul) and only fifty meters seperate them from the finish line. No time to think, you’ve got to tear along… tear along towards the line and cross it first to win a heaven-sent title. Fortune rewards the Argentinians, as Estefania crosses the line in 1”35’442 in front of her friend Melisa in 1”35’742 and Korean Yi Seul Aun in 1”35’745. What a final!

This race will remain engraved in our minds! And I bet that the champion and vice-champion of this 1000m world final still can’t belive what happened. Thanks to this race and the two medals, Argentina ranks 8th at the nations ranking, just behind France and in front of Italy. 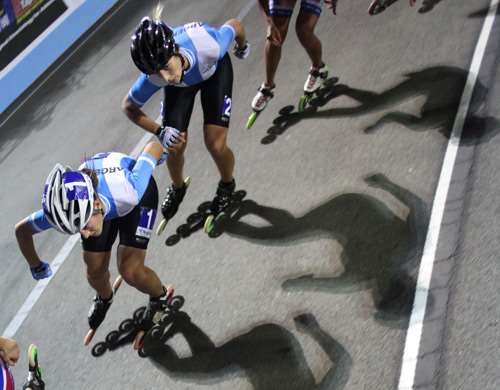 It’s now time to go back to the heart of our investigation in presenting you the Argentinian delegation in Yeosu. The latter was made of ten skaters, including one junior, five senior women and four senior men. Four officials were with them: a leader, a representative of the international racing committee and two coaches. No doctor and no physiotherapist came here in Korea.

The skaters have some financial support from the government to train in satisfactory conditions. Moreover, even if they all have a job besides their elite sport activity, most of them have flexible working hours.

The round ball of football is sacred in Argentina… the skating wheel is far less sacred! However, other sports are popular: field hockey, rugby and basket ball… Skating remains a small sport « and the organization of numerous world competitions in the past, all of which took place in Mar del Plara (1966, 1969, 1975, 1978, 1983, 1997) didn’t help skating develop to the extend that was expected » one of the coaches explains.

There are a couple of road rings and a dozen of skating tracks on the territory, but only two of them meet the international standarts.

The selection for the world championships

The coaches select the skaters according to peculiar criteria. « To keep it simple, even if an athlete wins the national championships, he is not automatically selected » the coach says. Several races are taken into account to spot the athletes who will be considered to be the best on a world championship: amongst these races, by order of importance, there are the Pan-American games, the South American championships and the national championships. Detection tranings are organized during the season to refine the choice.

The objective was to enter the Top-15, « that is to say ranking between the first and the fifteenth position » the coach clarifies. The aim is reached for Estefania Fasinato and Melisa Bonnet, as well as for Ezequiel Capellano who was within a whisker of podium during the final of the Men’s Senior track 1000m. Once the frustration of being at the foot of the podium gone, he said he was satisfied to have managed such a performance against such opponents! Indeed this final gathered two Columbians, two Taiwanese, one Korean, one New Zealander and one French (Elton de Souza). As for Mayra Arias, she gets a good 7th place for the road 10.000m point race. Victoria Rodriguez Lopez  also ranks 7th for the Senior 200m time trials (in 18”165). In the end, lots of athletes have fulfilled their pledges.

In terms of means, the trip was integrally paid by the government, and no particular support will be given to the medalled skaters, as they already get monthly financial support from the State.

As a conclusion, here is a message from one of the athletes, who wanted to add a couple of words for the readers of OnlineSkating, on behalf of his delegation: 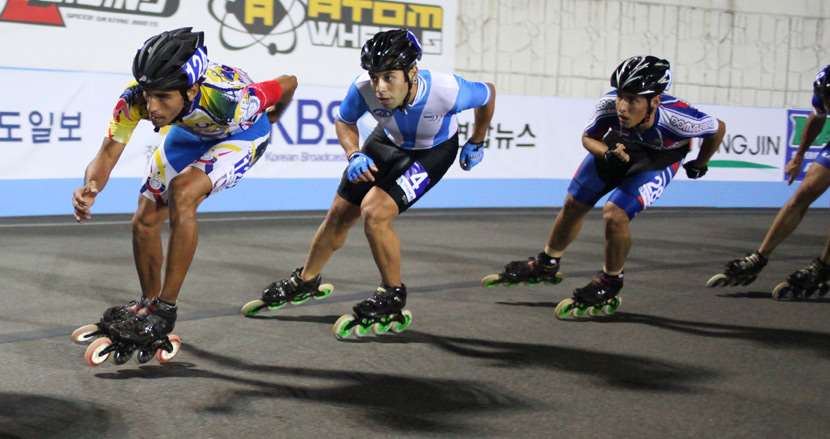