Many speed skaters have achieved hourly roller records over the years, often in very different conditions from one time to the next. The International Federation is working on standardizing the format to create an official record. An overview of the performances of these champions…

The record of the hour in inline skating: women’s performances

Within the framework of the world record attempt of Felix Rijhnen (GER) and Mareike Thum (GER), the International Roller Skate Federation (World Skate) has worked on a set of rules for the event. It was drafted in collaboration with Pascal Briand.

The objective: to standardize the conditions of the record in order to be able to homologate it and to create a form of equity between the skaters who would try to tackle it. 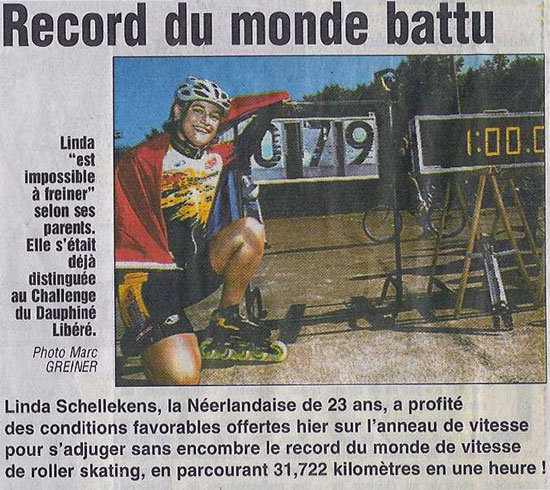 When you look back at the history of inline skating records, you will see that the Netherlands has made a specialty of it! The Dutch were among the first to use modern inline skates, which partly explains their omnipresence in the rankings.

A record achieved on the Vriezenveen track.

The Dutch Karin Verhoef passes the 30 km mark on the occasion of her world record of the hour in inline skating. Also on the Vriezenveen track.

Linda Schellekens is 23 years old when she tackles the world record of the hour in women’s inline skating. She has only been roller skating for 4 years when she made her first record attempt on April 6, 2003 on the track of the Joseph Boucau Stadium. The wind prevented her from going to the end of her dream, she only needed 600 m to reach it.

On the 400 m speed ring in Grenoble, she then organised a second attempt. She is helped by the Laurent family and her LOU Roller club.  The Olympic track, faster and more favourable, gives her wings. Equipped with a 5×84 mm turntable, she just missed the 32 km target she had set herself but still dropped the old mark.

It is not surprising that almost 17 years after Linda Schelleken’s Mareike Thum broke the record on the track of the Arena Geisingen. She improved it by almost 2.614 km. She did an excellent job and only just missed her goal of 35 km.

The record of the hour in rollerblading: men’s performances

Hal Berte was a sportsman at heart. He left his mark in roller skating but also in cycling. The “Véloce-Sport”, a newspaper specialized in the “little queen”, refers to him :

A paragraph in the newspaper “Le Matin” of January 30, 1911 suggests that he had held the record for the hour since March 1, 1902. The French record of the hour was then held by Nicot, a professional skater, with 25 km 80 m. 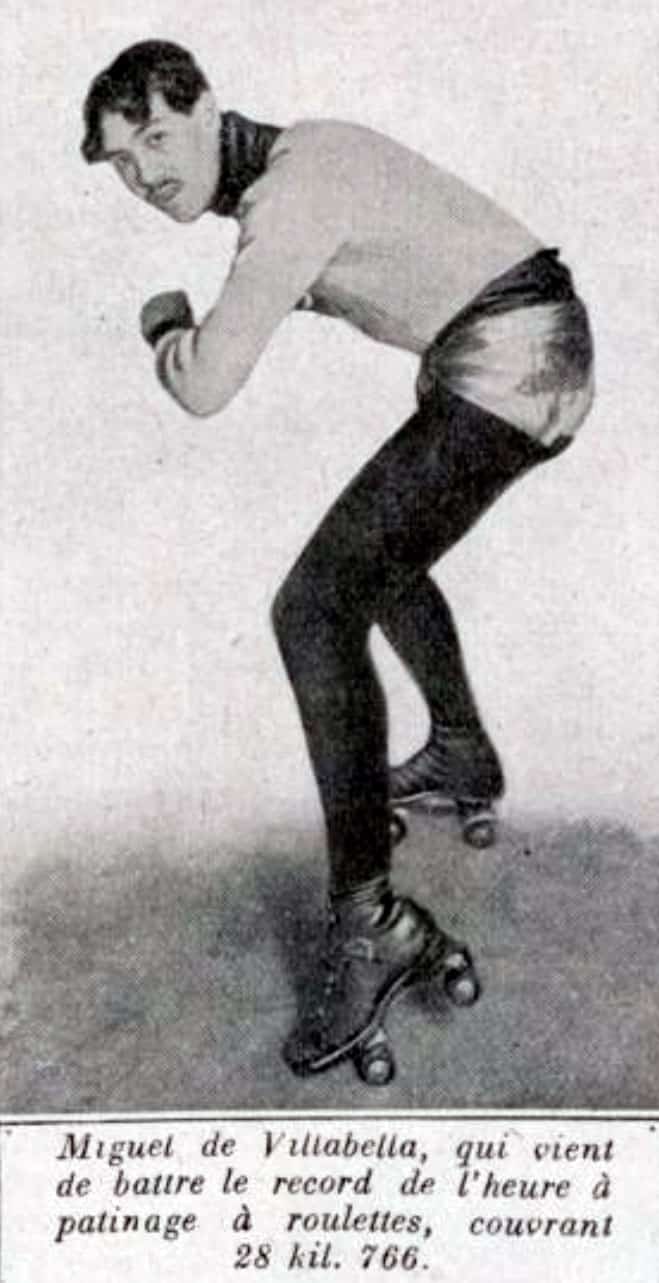 For his one-hour record, he set out on a track that was 133 meters long and 33 centimeters in circumference. The newspaper “La Nouvelle Presse” of February 5, 1911 reports Jess Carey’s hour record, after his beautiful victory of the “Patin d’Or”.

On October 27, 1912, Villabella took part in the Grand Prix du SCUF, an interclub match against the SOCF and the SRHCF at the Palais des Sports. Spanish champion and winner of the American-style Easter Grand Prix of the 2 Hours, he had already been noticed by the public.

La Vie au Grand Air of November 24, 1912, refers to Miguel de Villabella, a skater who broke the hour record by covering the distance of 28km 766m. The press would be more fertile some thirty years later when Villabella took centre stage at the opera: the “Paris Midi” edition of 6 August 1941 and “Le Journal” of 25 August 1941 tell us that Miguel de Villabella was also an opera singer! As the first opera tenor, he had notably interpreted the Barber of Seville. Villabella was smiling from his physique at the age of 18, with only 45 kg, as he liked to remind us in Paris Midi.

A record achieved on the ice rink in Vriezenveen.

Again on the ice rink in Vriezenveen, the track of all records for the Dutch attempts!

Dick Hoeve realizes his performance on the Vriezenveen track, the same track that will be used by Haico Bouma a few years later.

It seems that Eddy Matgzer held the record before Haico Bouma. 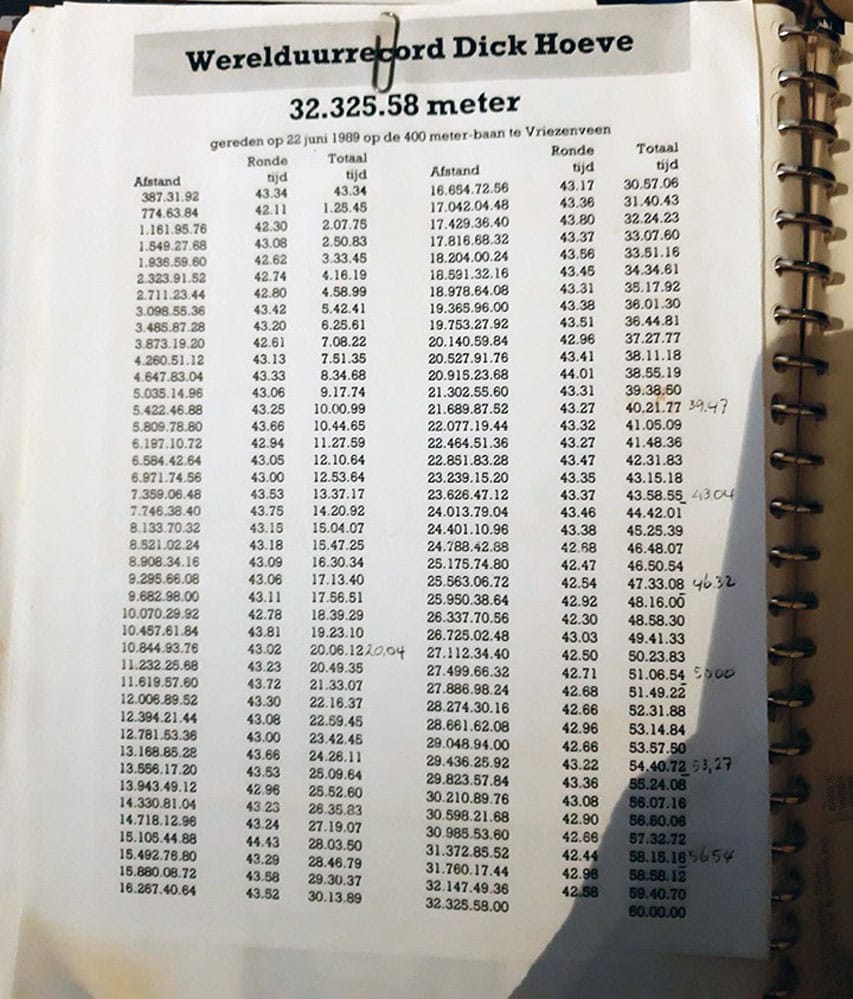 The second record took place on the 400 m ice rink at the Groningen Kardinge sports centre. Unlike the Vrienzenveen track, this one is covered. Concrete is also faster there. He set off on his 5×76 mm skates with a pair of Viking skates with a rather… soft structure. He improved it by 1312 metres and 77 centimetres for a total of 35 kilometres 589 metres and 12 centimetres. 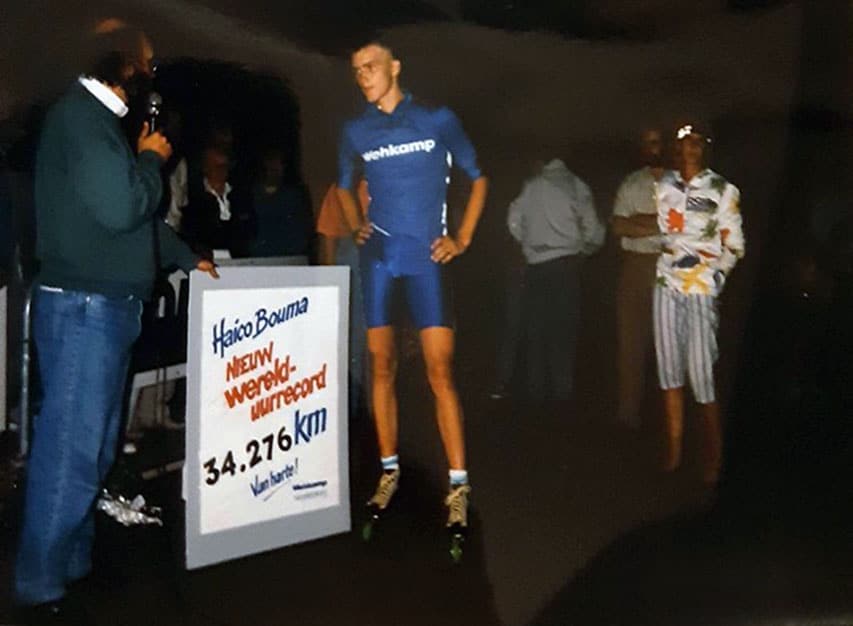 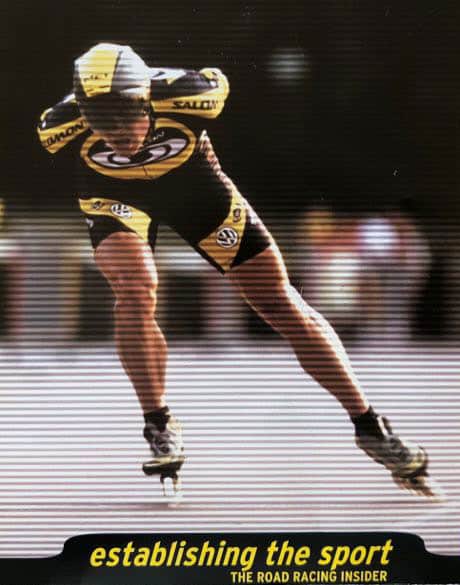 Tristan Loy joined the international Salomon team in 1997. At the same time, a road circuit was created in Landevant (56). Tristan tests him and finds that he is very fast.

The following year, he sets off in search of the one-hour record. He manages to knock it down.

Tristan is the last Frenchman to hold this record. This performance was achieved on the Olympic track in Grenoble. For his record, Tristan was using in 5×80 mm with a clap frame! It was equipment that Salomon wanted to highlight. The idea was to do everything with the brand’s equipment.

Skater Frank Fiers was born on August 9, 1971 in Wetteren (Belgium). After several unsuccessful attempts, Frank Fiers finally conquers the title of the fastest man in the world over an hour on roller skates. His performance took place in the semi-covered ice rink of the Sportcentrum Kardinge in Groningen, in the north of the Netherlands. Barely 50 m better than Tristan Loy!

Hello Frank, what made you try to break the one-hour record?

I’ve always been interested and inspired by the concept of the hour record, not only in inline skating, but also in cycling. An athlete alone on the track, fighting against time. After Tristan Loy’s record in 1998, I started testing on the track. Tristan, was skating in one of the greatest teams of the time: Salomon Inline. He inspired me and the fact that he broke the record inspired me to take up the challenge. The more I tested, the more I began to believe I could do it. When Tristan broke the record again in 2000, he improved it by 649 metres. It was really a great progression that raised the level of the challenge again…

However, I continued to train to achieve this goal. In 2002, I tried to beat it for the first time. I covered almost 36 km, 400 m less than Tristan’s record. Even though I didn’t break the record, I learned a lot during the preparations and during the attempt. I was confident that I could beat it by continuing to work hard. Three years later, I succeeded.

What is your best memory of that moment?

Realizing that no one has ever been faster than you are is an incredible feeling.

What was the hardest part?

After 50 minutes, I couldn’t maintain my lap time. I had to do it to break Tristan’s record. I lost 3 tenths of a second on each lap. And I had a very small lead on Tristan’s record. With 4 minutes to go, I was only 2 seconds ahead of Tristan. I had never felt such pain in my legs before. Luckily I was able to keep up the pace for the last 4 minutes.

What kind of skates did you use?

Custom-made shoes made by Mariani with Fila 3×100 mm and 1×84 mm. I used Hyper Stripes wheels and ceramic bearings.

Do you have any advice for Felix Rijhnen?

Between the 45th and the 55th minute it becomes very difficult. The legs are burning. It’s very important to keep focusing on technique and to keep faith, even when the pain is overwhelming. 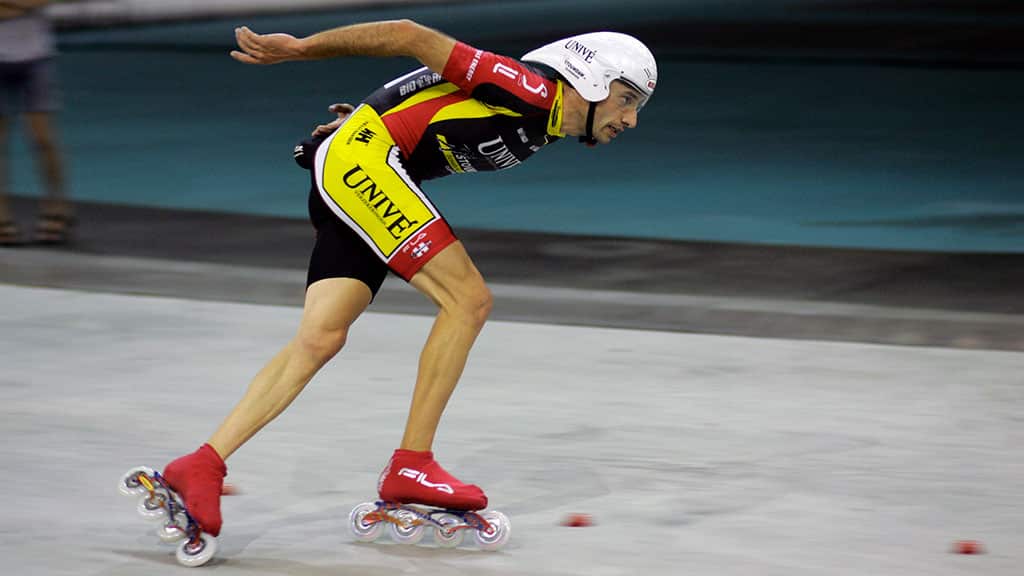 The mark of 40 kilometers was very close! This will undoubtedly be the goal of the next athlete who will try to break the hour record. German speed skater Felix Rijhnen chose a 200m track for his hour record, a brave choice in terms of the number of corners and laps to be completed! He will start the record attempt on 3x125mm wheels.

For the anecdote: a record on the road

The Italian Mauro Guenci is a fireman by trade. For the anectote, he covered the distance of 38.632 km on road in Senigallia, near Ancona, Italy. He chose a 1088.60 m circuit. The event took place on Roller Day with Team Roller Senigallia.

For purists, this type of record is a little less prestigious because the road courses are less homogeneous and less standardized. The skater tires less quickly because there are fewer turns to negotiate. The circuits can also have downhill runs and thus change the game.